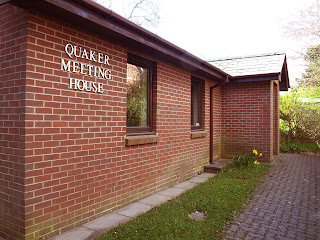 Due to not being able to meet in person together, we are currently meeting in a Zoom Meeting for Worship.  The Zoom meeting commences at 5:15pm to allow friends to settle, Meeting for Worship is 5:30pm for an hour, followed by a bief Afterword and then an opportunity to chat.  If you would like to join us please email tyolaf@gmail.com

We are a small, welcoming group of friends, very relaxed and friendly.

Where we meet (see above)

Llandrindod Local Quaker Meeting (LQM) meet for worship and fellowship at their Meeting House in Temple Street, Llandrindod LD1 5HF every Sunday at 11.00 am except for the third Sunday in each month.

The Meeting House is to the rear of the, brick building which was the Victorian Meeting House  fronting onto Temple Street,(opposite Aldi)

There is street parking at Llandrindod (note: Aldi car parking is time-limited so is best avoided).

On the third Sunday of each month Meeting for Worship (MfW) takes place at the ancient Pales Meeting House, Llandegley.

Parking is available at the Pales in the nearby Quarry.

For details about the Pales go to www.thepales.org.uk.

How we fit into the Quaker organisation

Llandrindod LQM is one of the constituent local meetings of the Southern Marches Area Quaker Meeting SMAQM.

Llandrindod is the most westerly LQM of the AM, for other Meetings in the area look at the Area website at www.smquakers.org.uk.

Llanidloes LQM is the nearest LQM to the north-west of Llandrindod and is a part of Mid Wales Quaker Area Meeting.

SMAQM are a constituent area meeting of Britain Yearly Meeting, whose web address is www.quaker.org.uk. 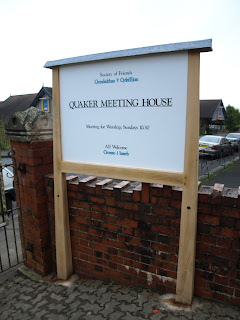 Quakers have no liturgy or dogma.

There’s no divide between priest and lay people, which is sometimes expressed as being a church in which all are part of the priesthood and there is no laity.

Rooted in Christianity, Quakers believe we hold this witness in trust for the whole church. Quakers work gladly with all faiths and people of no faith.

There’s an introduction British Quakers (here), and a good brief independent description by the BBC (here).

The best thing is to come and experience the simplicity and power of your local Quaker meeting for yourself. If you want to attend Llandrindod Quaker Meeting just show up, at the moment join into the zoom!

Times are shown in the panel (on the right).

Everyone is welcome, there’s step-free access and free coffee, tea and biscuits after.  Every now and then we have a shared lunch. 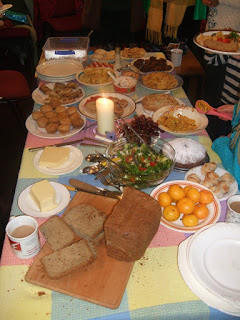 All welcome irrespective of background, disability, ethnicity, gender identity or sexual orientation. We welcome ministry in whatever language is most comfortable.

Here are two other sites that provide information about the Llandrindod Meeting House.  Historypoint  and Coflein

Why do we do what we do.
This piece was written for a session of our Area Meeting, and so is aimed at Friends who already know something of our Society, we include it here because it outlines our spiritual approach and includes something about the religious language that can be a barrier for some.

We all know the story, even if we are relatively new to Quakers, we know about George Fox sitting under the tree despondent about his spiritual search, suddenly realising that “There is one … who can speak to my condition,” and that that one was within him.

The Holy Spirit had come to teach his people himself. However that story, like many of the stories of early Friends is expressed in the language of the 17thC, by people who were deeply steeped in the Bible and Christianity. For some of us that language can be off-putting, some of us now are uncomfortable with “God talk” and references to the God within might be something that has no relevance.

But, Fox used another word that has total relevance even 350 years later, and that word was “experimentally”.

What he had realised, in that moment of sitting under the tree, was what he now knew, he knew because he recognised it as his own experience, and we share that experience.

There is something which we may think of as “that of God” within each of us, or we may be aware that there is something that, particularly when we sit together in silence, is pressing us to lay down our own ego and to follow what truth and love demands of us.

That experience makes us, just as it did George Fox, Quakers.

Testament to the World

That realisation, of what those early Friends called “that of God”, provided the basis for what now became their Testament to the World.

If all people share that gift within them, whether or not they have realised it, whether it is well developed or hidden, it must affect the way in which we think of others, and act towards them.

If we were to fight them with outward weapons, we risk damaging or preventing “that of God”. If others have the same potential that we do then we must treat them equally. We have no right to more of the world's resources than any other, and so we must live simply, so others may simply live.

If in the silence of what we term worship we know that we can only approach that experience with truth, then our approaches to that of God in others, have to be in truth.
So the Testament to the World had to be refusal to fight; working for equality, simplicity and speaking truth. Further, that Testament had to be a testament of action, of the way in which they led their lives rather than just a repetition of words, a notion to be justified.
That need to try to make our lives reflect our experience of the divine is still the challenge we live with.

There is a further experience that affected them and still affects us. That relationship between the individual and what directed them when they could withdraw from the noise of the world into silence, was, and is, a personal relationship. It is a conversation that happens within; but it is an experience that works better when it is done communally.

We can, and must, develop that relationship with “that of God”/the deeper self, throughout our lives and strengthen it through all our actions, but we need the support of our friends too! Our interaction and combination with our friends keeps us grounded and stimulated.

Having made his realisation of his own potential, Fox set out refreshed and renewed to spread the word, and, as he did so he began to build his “contact list” of friends, people who recognised, in what he was saying, what they knew in the depths of their own experience.

The group of friends began to grow, and, as it grew it was seen by the establishment as a danger, and these friends began to be persecuted, particularly after the Restoration of the Monarchy.

They would not physically fight back against that persecution but they needed to know its nature, and to detail its effects. They began to gather information on their sufferings to be recorded. The fact that we, the modern day Society of Friends still use that same name, for our central committee, Meeting for Sufferings, reflects the gradual change of purpose, but also is a constant reminder of where we fit into the state and the world. We are not part of the nation state, not part of the establishment, our relationship to it is to speak truth to power regardless of the outcome.
In our local meetings too, we try to live out our Testament to the World. If we are led by “the God within/deeper self” rather than by the ego/surface self then, when we are faced with decision making, we cannot decide what is best, we can only try to discern what truth and love demands of us, and, when we move towards that discernment we can only hope that that discernment is the right one. That is something that cannot be done “on the hoof” in chats between individuals over coffee, it can only be done when we take ourselves into the silent communication we experience in our worship, where we join with our friends to gently feel our way past the clamour of the world into a deeper place.

In accepting equality as a guiding principle we cannot look for leaders or for servants. We have to accept, in becoming part of the group, that there is no priesthood, no experts specially trained to take the lead, but equally there cannot be a laity, the “ordinary” people who can make the body of the group, just turning up once a week, if we even feel that keen!

In a society of equals there has to be an expectation that all the group are responsible for the rest. All are clergy, all part of the process of discernment, all responsible for cleaning the loo, making the tea, ensuring the spiritual growth of all the others in the group. “If not me, then who?” has to be the guiding question.
In 350 years the Society of Friends has changed in all sorts of ways , the words we use, the clothes we wear, but it has not changed in its deepest essentials, which is why we are who we are.